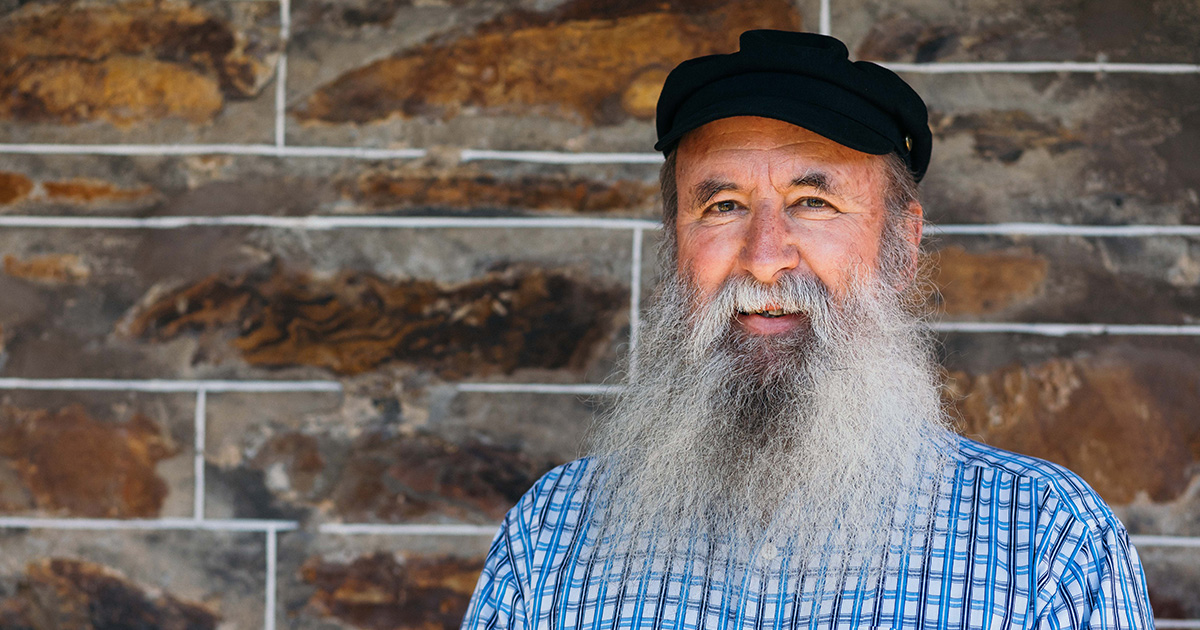 Keeper of The Flags

People know him as “the flag man”, but with a cheeky grin and a scratch of his grey beard, Adelaide artist and music enthusiast, John Whitney, brushes off the lofty title to explain he’s “just the keeper of the flags”.

For more than 20 years John has worked with Angus Watt, the renowned international artist, whose famous flags have turned everything from beachside festivals in Spain, to the mud-strewn fields of Glastonbury, into celebrations of bright fluttering colour.

Together, the duo has literally sewn the fabric of WOMAD into Adelaide’s chapter of the famous music festival – since the Adelaide Festival and Peter Gabriel first introduced it to our creative little city back in 1992 – a role John takes as seriously as his own art.

“I have been a full-time visual artist and illustrator since 1987, so have always been involved in Adelaide’s art scene,” John said.

“The WOMAD connection began when I found myself working with a group of local musicians, writers and artists for an event management company here in Adelaide."

“We all worked on our own solo projects, but being social types, we’d come together on the weekends to work behind the scenes on everything from Humphrey Bears’ Picnic to the Skyshow.”

John says he still remembers the day “the boss”, Steve Brown, announced that the Adelaide Festival had snared WOMAD. A self-confessed Peter Gabriel and Genesis fan, John jumped at the opportunity to work at the famous festival.

“Those first few WOMADelaides were just like country fairs,” he said. “The sense of community was like nothing I’d ever experienced.”

“I got to meet Peter Gabriel, but there was no pomp and ceremony, he was just around, mixing with everyone, from artists to musicians, to the event guys, like me.

“When you were backstage it felt like everyone was equal, no matter where you came from or what your role was – we’d often have little soccer matches backstage, and there was always an impromptu jam session happening. “That’s the joy of WOMAD, it doesn’t matter who you are, it rubs off on you.”

After a few years of being “the lacky”, John’s reputation as a visual artist soon got him promoted to the unofficial role of “artist host”.

“Back in those early days we had a lot more visual artists visiting WOMADelaide,” John said.

“We had Ndebele women doing Ostrich egg painting, Isaiah from Johannesburg doing wire sculpture and a team of Indian artists doing giant Rangolis made out of food.

That’s when John heard about Angus, the young artist who was adding colour to the UK’s WOMAD Festival, in the form of brightly painted flags.

“In those days WOMAD in the UK was held in Reading, which is just outside of London and the most boring site you could ever imagine,” he laughs.

“It was a big flat area on the banks of the Thames, so they decided it needed some brightening up – some colour, and some height.

“There was a young chap there called Angus Watt whose father was an artist and lecturer at the Newcastle Art School – both artists themselves, Angus and his sister Shona had begun making flags together because they wanted to see their paintings move.”

Angus’ flags soon became the visual trademark of WOMAD in the UK, and are now known as the quintessential “festival flags” of Europe.

“I met Angus in 1999, the year he came out to show his flags," he said. “We already had a stunning ground, we had the trees, we had the height, so his job was to add some colour.”

Angus subsequently returned in 2009 to facilitate a flag making project with a group of Indigenous artists from the APY Lands, whose flags have been flown at WOMADelaide every year since 2010, and have also been exhibited at WOMAD festivals in the UK and New Zealand.

Images: Development of the "Kungkarangkalpa in the Sky (Seven Sisters in the Sky)" project. The completed paintings, each with a different Seven Sisters dreaming story, were created across 3 years from 2009 - 2011.

“The women had discovered old pastel drawings that they’d done on the missions, and Angus worked with them to recreate their childhood illustrations into a set of fantastic flags.

“My job was to coordinate the project with Angus, the artists, and a team of seams-people. We were based at Better World Arts in Port Adelaide and every morning when I went to pick the ladies up in a bus they would be standing on the sand dunes looking out at the sea – many of them had never seen the ocean before.”

“We made a set of 20 flags with the same group of women each year for three consecutive Festivals, and we still put them up at WOMADelaide every year – as well as a new set of Angus’ flags.”

Although Angus’ flags remain an important feature of the festival in Adelaide, he left the job of constructing and hanging them in John’s capable hands after his 2009 visit, and hasn’t returned to Adelaide since.

“Our summer is Angus’ winter, his downtime, so instead of travelling all the way here for every Festival, he sends out 160 new flags each year and I work with my team to put them together,” John says.

“Angus’ technique in assembling the flags is quite unique – they need to be constructed and sewn in a way that allows you to see the artwork on both sides – but once he taught us all how to do it, he was happy for us to take on the job for him.

“We source 8 metre tall bamboo flag poles from Gympie in Queensland – that’s the only place where we can get them tall enough – but we wouldn’t have it any other way.

“If you’ve ever sat leaning against a flag at WOMADelaide you’ll know that the creaks of the bamboo sound like you’re on an old ship. It’s magic.” 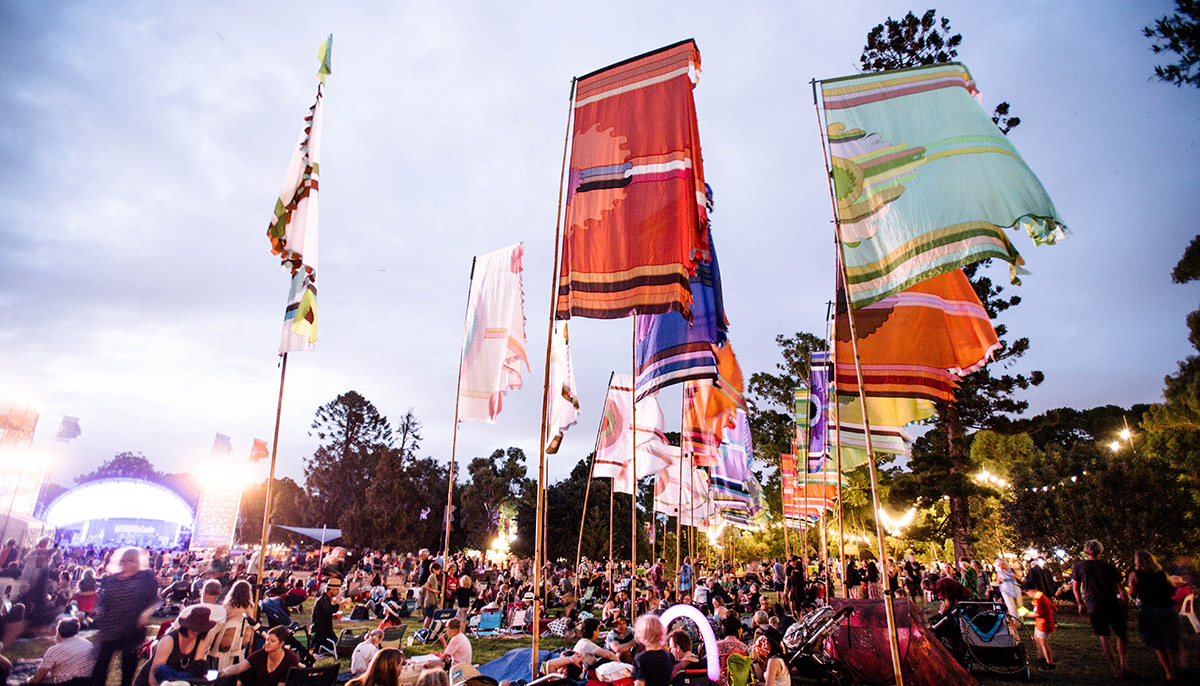 John says that while the festival has certainly grown over the years, it’s never lost its sense of community, something that was particularly evident when he suffered a stroke a few years back.

“My crew are amazing, a lot of them have been doing the flags with me for years and we all work together to make it happen, I was able to get straight back into work following the stroke that year because everyone pitched in and helped,” he said.

“I decided then, that WOMADelaide is my idea of what heaven would be like.

“You’ve got top music, lovely food, a great environment and all your friends are there – what more do you need?”