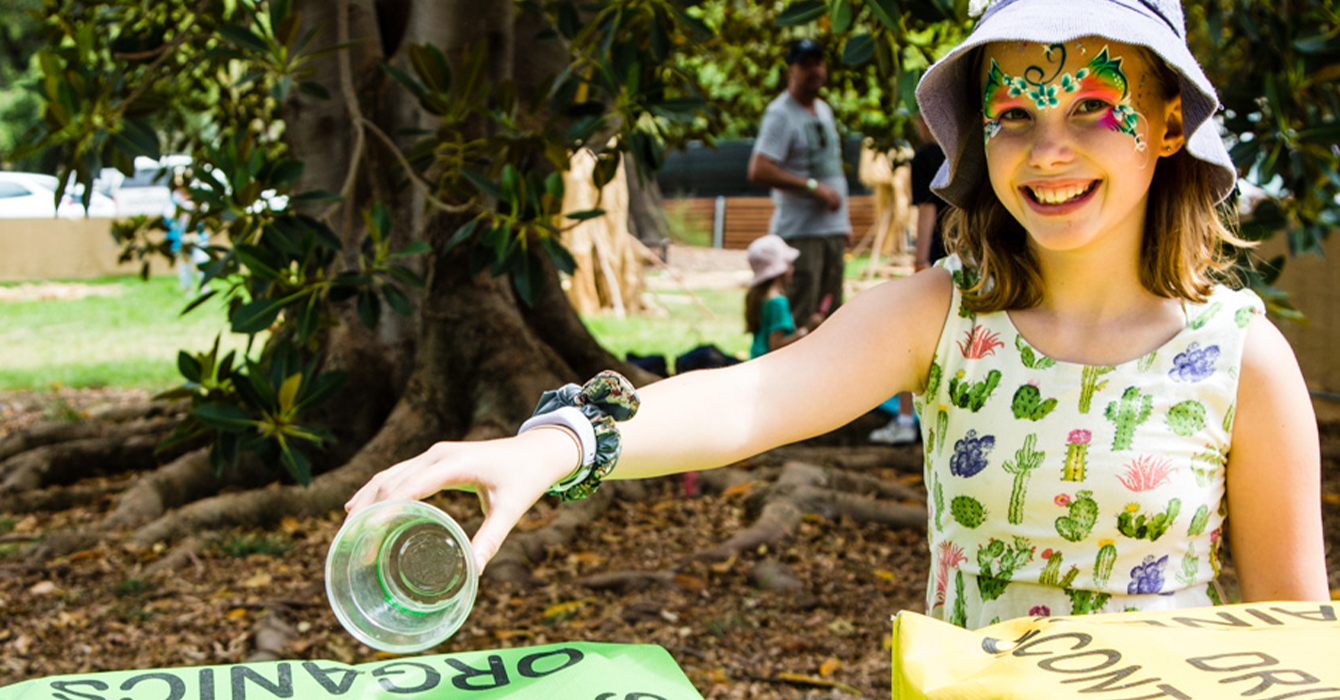 It’s a holistic life choice that’s as much about how you sustain yourself and your family, as it is about looking after the planet.

With the devastating scenes over summer still fresh in all of our minds, some have a renewed energy to rise-up, fight and fundraise, while others have been left feeling utterly defeated.

Ultimately, if we don’t make living sustainably socially, culturally and mentally achievable, it will be pretty hard to maintain… or dare we say it, sustain!

As our favourite weekend of the year approaches, we look at some of the people, panelists and practices of WOMADelaide that will help guide us all in how to live more sustainably, inside and outside of the festival gates.

Former UN Secretary for Climate, Christiana Figures said in her 2016 TED Talk that bringing about change in climate policy is about stubbornly and relentlessly injecting “optimism into the system”.

“We have got to change the tone of this conversation, because there is no way you can deliver victory without optimism,” she said.

“I use optimism as a very simple word, but let’s understand it in a broader sense – as courage, hope, trust, solidarity, and the fundamental belief that we humans can come together and help each other to better the fate of mankind.”

Christiana and her UN political strategist Tom Rivett-Carnac were the “architects and driving force” behind the 2015 Paris Climate Change Agreement. Their campaign of relentless optimism ultimately led 194 countries, including the EU and China, to change economic policies to collectively tackle the climate emergency.

But their mission didn’t stop in Paris.

They continue to run international campaigns and initiatives that educate and encourage optimism about the things we can do to make a real difference to the climate crisis.

Their podcast Outrage and Optimism highlights the need for the kind of direct action we’re seeing in the streets. But behind it there is a deep conviction that we can address climate change together, with distinguished guests such as David Attenborough, Ellie Goulding, Jane Goodall, and Greta Thunberg.

Their highly anticipated book titled The Future We Choose also lists ten key things we can all do, right now, to make a difference to the climate crisis. Already touted as “one the most inspiring books I’ve ever read” by Sapiens author Yuval Harari, it will be released worldwide on 25 February, just ten days before WOMADelaide 2020.

To see Christiana and Tom in conversation with Sabra Lane, join them at The Planet Talks for Outrage and Optimism, on Monday 9 March at 1pm.

If you find the voyeuristic and catastrophic world unfolding on social media a little much for your mental health, you’re not alone.

Digital detoxes are fast becoming as commonplace as those of the food and wine variety, and if you’ve ever felt like taking a break from the screen, Robert Elliott Smith, is here to provide you with one.

Author of Rage Inside the Machine: The Prejudice of Algorithms, and How to Stop the Internet Making Bigots of Us All, he explores the nature of these powerful mathematical equations that rule our lives, finding that “centuries-old, non-scientific ideas are encoded deep within our modern technological infrastructure.”

In a nutshell, he’s discovered that some of the biggest contributors to racism, bigotry and political divides in modern society are the algorithms that feed our feed, and the Big Data miners who use that information to tell you what they want you to think, feel... and who to vote for.

Fortunately, it’s not all doom and gloom. His research has also revealed new ways of thinking that could help us fix the problem these algorithms have created. Phew!

To hear Robert’s perspective on algorithms, data and how our digital lives can become part of the solution, rather than the problem, join us at Planet Talks for the Big Tech, data ethics and bias in the age of algorithms panel discussion on Saturday 7 March, at 12:30. The panel will also feature, Julia Powles and Peter Lewis, and will be hosted by SBS presenter Marc Fennell.

You’ve changed your family bin situation from a duo to a quartet, and the green waste gets slimy, and the soft plastic receptacles at the supermarket are always jammed.

It’s inconvenient, but hey, you’re saving the world, right? Well… if you really want to take your carbon footprint down a notch, just managing your waste isn’t really enough – you need to reduce it.

And that means, embracing inconvenience. Trust us, we know, it’s not easy… but it can be done.

WOMADelaide has a zero waste to landfill target, and over the past five years we’ve managed to divert 97.7% of all of our festival waste away from landfill.

How have we changed?

In 2001 we were the first major event in Australia to adopt a waste management strategy that meant only biodegradable and recyclable wastes were produced by festival goers - this included cups, plates, crockery, serviettes and any items sold in packaging. In 2009, the three bin system that can now be seen at many other festivals was implemented, and in 2015 we upgraded our requirements to mandate that only compostable cups, utensils and packaging was used. In recent years we have been able to return up to 16 tonnes of composted green waste from the festival as organic mulch for use by the Botanic Gardens.

In recent years we have eliminated the sale of single-use plastics in the form of PET plastic drink bottles from our stalls, and in 2018 we moved to re-usable alternatives for our bars, engaging with circular economy practises. Every cup is designed to be re-used time and time again, including use at other festivals and events across the country.

Waste aside, we’re also acutely aware of the carbon footprint festivals can have, and since 2007, $2 from every WOMADelaide ticket sold has been invested in native biodiverse tree plantings at our WOMADelaide forests through our partnership with Greening Australia. To date we’ve planted more than 75,000 native trees across 65 hectares, offsetting more than 21,650 tonnes of carbon emissions.

So, how can you replace waste and recycling with reduction and reuse outside of the WOMADelaide gates? 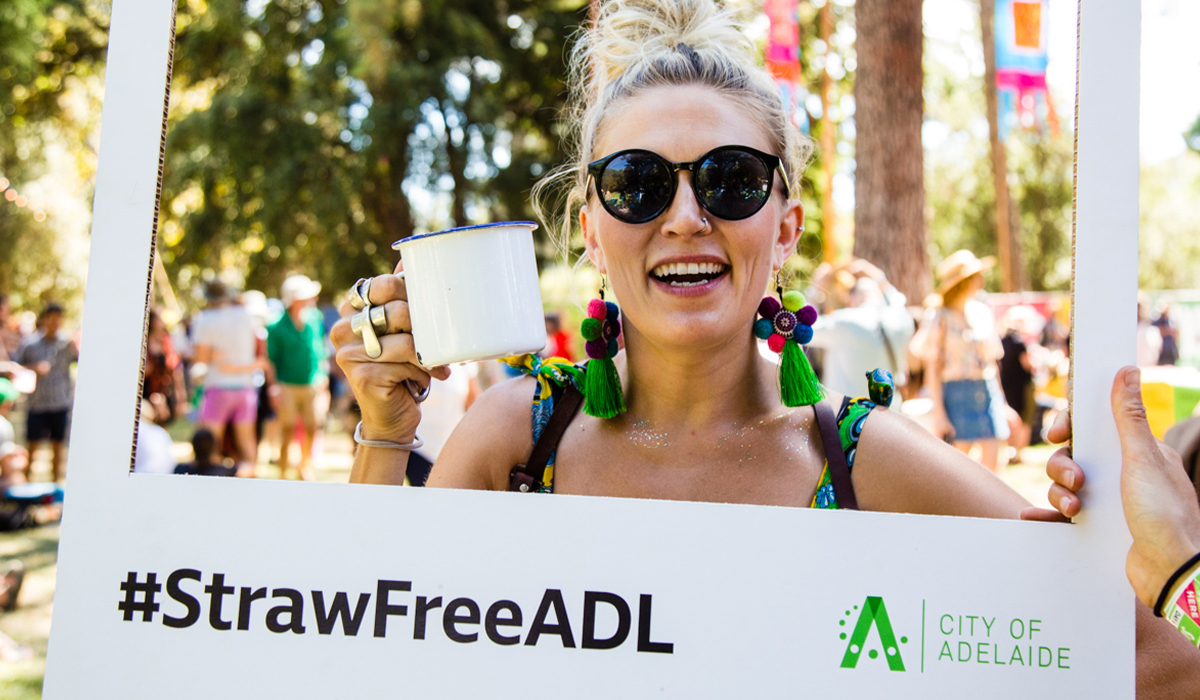 Here are a few practical tips that might make life a little inconvenient, but may also make it a lot more pleasant. After all, why are you in such a rush anyway?

With Brexit, Coronavirus, bushfires, climate change, Trump and the Kardashians taking up precious space on our TV screens, news feeds, and ultimately in our minds, it’s no wonder we’re all having sleepless nights. The world can be a scary place.

According to the Federal Government, surveys conducted in 2019 showed that four out of ten Australian adults report “insufficient sleep on a daily or several-days-a-week basis”.

And while maintaining a good diet and regular exercise have dominated the health and longevity conversation for years, experts are now saying that the sleep deficit epidemic is one of the greatest health challenges facing our society today.

So how can we sustain a life of challenging the status quo, fighting for climate action, embracing inconvenience, and also manage to fit in a weekend of dancing at WOMADelaide with our people… while still getting enough sleep?

Join Deb Tribe as she asks leading Australian sleep experts, Professors Greg Roach, Jill Dorrian, and Danny Eckert, that very question, as they explore how a sustainable, healthy, and long life can begin with a good night’s sleep.

I’m so tired of waking up tired will take place fittingly at the conclusion of this year’s Planet Talks series, on Monday 7 January at 5:15pm – just in time for you to get home, brew a camomile tea and be tucked away in bed for an optimum eight hours.

Feeling helpless about the state of the future, Australian filmmaker, Damon Gameau – from That Sugar Film fame – set out to make a film for his daughter about what the world would look like in the year 2040.

In doing so, he discovered there was another story to tell, and it wasn’t all bad.

“2040 is a letter to my daughter, showing her what the world would look like in twenty years’ time if we put into practice the best solutions that exists today,” he said.

“We spent eight months researching… we did a deep dive on what solutions did exist, how plausible they were, and in particular what were the cascading benefits of those solutions.

“And then we thought, well, there’s probably room to tell a different story… let’s actually start balancing all the negativity and the dystopian versions of the future with some more hopeful, optimistic and positive ones.”

If you’re sick of the negative rhetoric, join us to learn more about the positive stories Damon discovered, and how scientists, law makers and progressive governments are doing their bit to rewrite the future, at our Planet Talks panel discussion, We can still fix this, on Monday 7 February at 3pm.