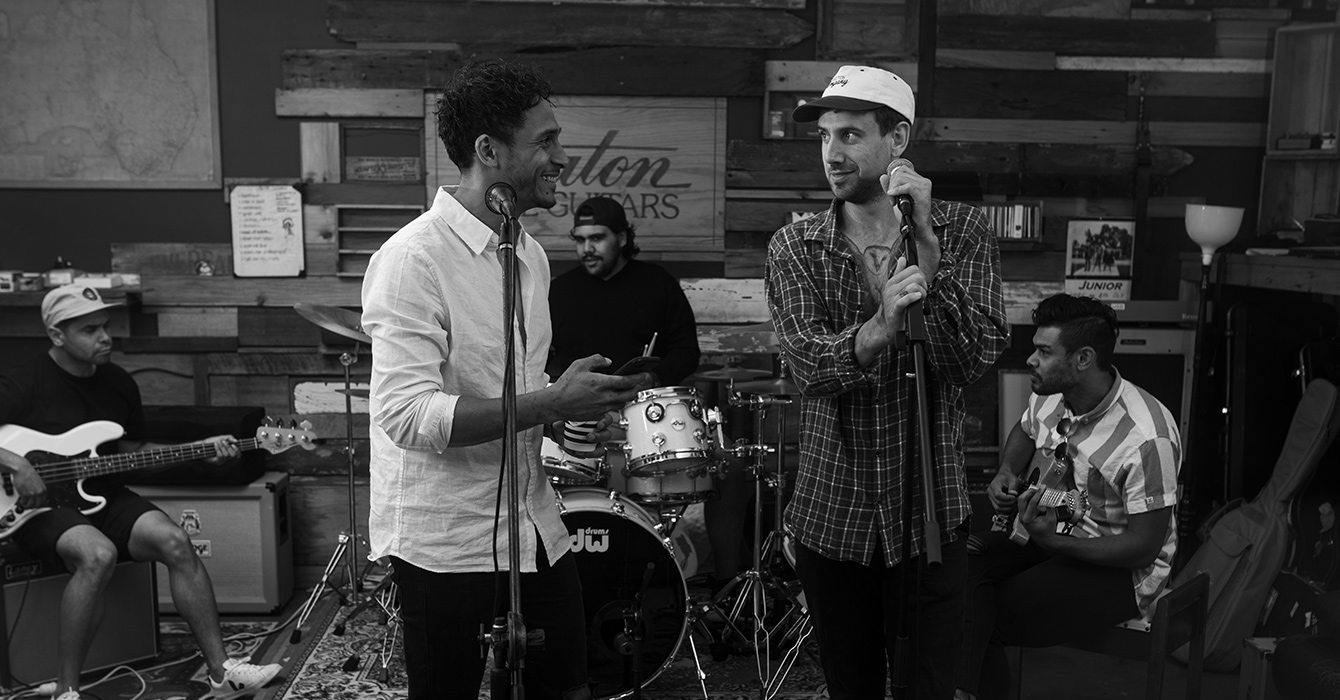 The new WOMADelaide x NSS Academy has identified 10 artists from First Nations and multicultural communities to take part in an extensive year-round program of workshops and activities, culminating in a number of artists performing at WOMADelaide 2021 and 2022.

MRLN x RKM have been selected as the opening act for Vika & Linda and Midnight Oil at WOMADelaide on 6 March 2021 and the audience of 6,000 will represent by far the biggest show of their career to date.

Academy artists will engage in a tailor-made professional development program of events and masterclasses that sees them being matched with high-profile Australian music industry mentors such as Felix Riebl (The Cat Empire); Carlo Santone (Blue King Brown manager, co-founder and bass player); N’Fa Jones (1200 Techniques and Cool Out Sun) and Brian Dubb (CEO and founder of artist management application Centralized.me).

They will also receive ongoing training via songwriting intensives with leading SA artists such as singer-songwriter Nancy Bates, and Grayson Rotumah (Centre for Aboriginal Studies in Music). With the aim of building a 45-60 minute ‘gig ready’ set of original music, the WOMADelaide x NSS Academy will offer artists song writing in-depth creative stagecraft development sessions and tips on how to expand their live performance abilities as they learn to work with visuals, projections, backup singers and even onstage dancers.

WOMADelaide Director Ian Scobie said “Over many years we have nursed an ambition to help build the future careers of young musicians, not only through experiencing the extraordinary artists who perform at the festival but through a tailor-made development program. We are thrilled that the Academy will combine professional mentors with NSS’s acclaimed training initiatives, further building WOMADelaide’s connection with local emerging talent and audiences across the community”.

Nick O’Connor from The Northern Sound System said “NSS is passionate about supporting emerging original contemporary musicians in South Australia. The Academy enables us to deliver a hyper-fertile environment for SA First Nations and multicultural artists to be able to access the information and resources they need to activate their visions. This is a very exciting initiative for all of us!”

Marlon Motlop AKA MRLN, born and bred in Darwin and now living in Adelaide, is of Aboriginal Larrakia, Kungarrakany and Thursday Island heritage. His deep love for family and his country follow him in all passions, including his songwriting which is sharply insightful and distinctly honest. RKM is Adelaide based MC Rulla Kelly-Mansell, a Tulampunga Pakana man from Kooparoona Niara, Lutruwita (Tasmania) who grew up connected to country and is a truly unique storyteller. He and four other local musicians will join MRLN for the live show on 6 March.

Ugandan dancehall-reggae artist Jimmy Jamal Okello AKA Sokel grew up performing with his church choir before moving to Australia, where he was exposed to many musical tastes, igniting his passion for music. Inspired by his family’s Griot heritage, 19 year old hip-hop artist Barnaba$ from Liberia has set out to become a modern African storyteller in the style of Kendrick Lamar and Mos Def.

Born in Kenya, hip-hop/soul singer-songwriter Elsy Wameyo’s soulful music and poetic verse are the embodiment of her personal experiences of challenging society’s boundaries.  She was the first woman to collaborate with local record label Playback 808, founded by NSS alumni, South Sudanese MC Gabriel ‘DyspOra’ Akon. Estee Evangeline is a pop/soul artist who kickstarted her music journey when she entered the Malaysian charts at the age of eight with a number one hit song: a duet with her mother.

Singer songwriter Katie Aspel is Ngarrindjeri artist from Raukkan who uses music as a form of personal storytelling and is hoping to pave the way for other young Indigenous artists.  Seventeen year old singer-songwriter Tilly Tjala Thomas’ folk, country and indie pop is inspired by her Nukunu culture and she recently performed as the opening act for Something for Kate and Bernard Fanning in Adelaide.

Hailing from the Anangu Pitjantjatjara Yankunytjantjara Lands in SA’s upper North West corner, DEM MOB are the first group to rap in Pitjantjatjara, while Sonz of Serpent is a New York-style hip-hop group made up of Native Emcee, Native Son and Yowie, formed in early 2017.

The WOMADelaide x NSS Academy is a WOMADelaide Foundation project receiving assistance from the Government of South Australia, the Federal Government’s Restart Investment to Sustain and Expand (RISE) fund, with support from the City of Playford and NSS.