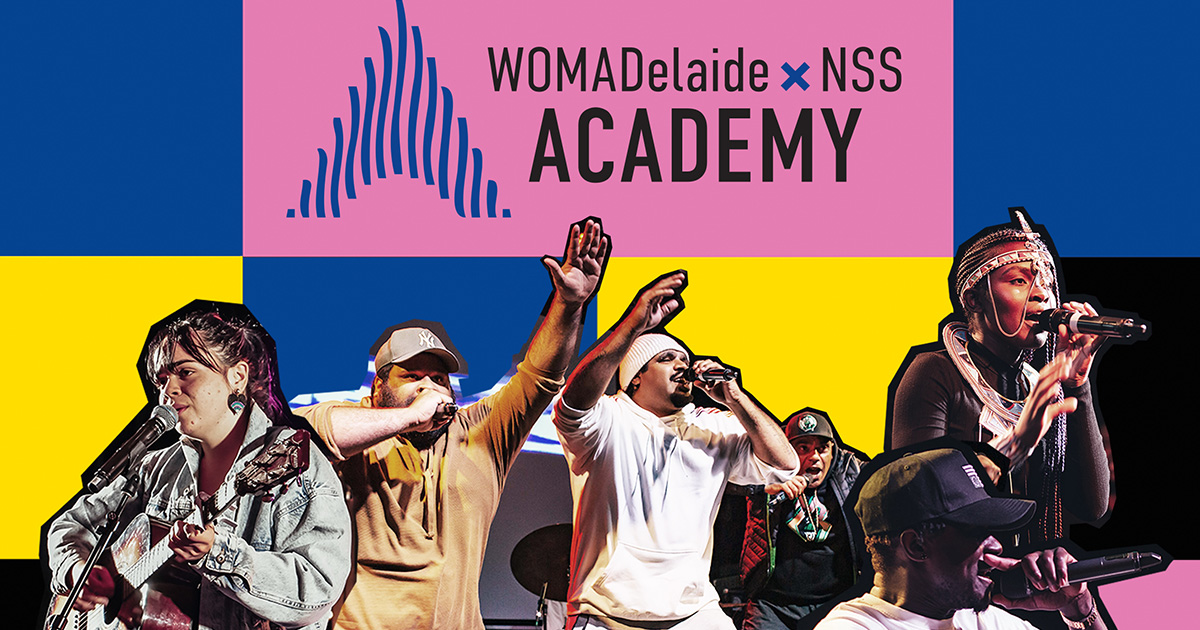 WOMADelaide and Northern Sound System (NSS) today announced the seven new artists selected for the second round of its successful Academy music development program. The WOMADelaide x NSS Academy offers training to young artists from First Nations and culturally diverse communities in Adelaide’s Northern suburbs, culminating in the opportunity to perform at the WOMADelaide festival.

The inaugural Academy won Best New Initiative at the 2021 South Australian Music Awards and artists Marlon x Rulla opened for Midnight Oil at WOMADelaide 2021 and supported Xavier Rudd on his 33-date Australian tour. Kenyan-born hip-hop artist Elsy Wameyo, who performed at WOMADelaide 2022, is now being touted as ‘one to watch’ by Triple J Unearthed and Double J and will support Hilltop Hoods and A.B Original on their upcoming arena tour.

WOMADelaide Director Ian Scobie said “It’s been a joy to see the first round of Academy artists flourish. We are excited to welcome the new artists and to be an integral part of their future development and, hopefully, their emergence onto the wider Australian music scene.”

Jaja Dare, Program Manager for the Academy said “I am stoked to be working with these awesome artists who all bring their unique and precious value to this experience. Together we will elevate our cultures and how they inform the stories that connect to the First Nations sacred lands we produce music and perform on.”

WaiKid is a singer-songwriter from Sierra Leone in West Africa who strives to make an impact with his versatility, art and music. A mix of Afrobeat, Afro-pop, R&B and soul, he is inspired by the likes of Michael Jackson, Tupac, Wizkid, Davido, Burna Boy and Rema.

From Malawi in Southeastern Africa, Laitsi is a rap artist now based in Adelaide on Kaurna Land. Laitsi shares his truth and deep connection with music through his unique hip-hop/rap combo amplifying his gentle power. His repertoire spans pop, indie-rock and deep house club vibes.

From the Anangu Pitjantjatjara Yankunytjantjara (APY) Lands, DEM MOB deliver a new sound with a community perspective. They walk their own path - being the first rappers to cut tracks in Pitjantjatjara – and seamlessly switch between languages while keeping strong in their flow. With family roots tying back to Coloured Stone, No Fixed Address and Yothu Yindi, it’s no surprise they are pioneering a new sound.

Elizabeth Ruyi is an Adelaide singer-songwriter who shares her honest passion for music in every performance. As an Australian-born Malaysian Chinese woman, her cultural background and unique experiences form a prominent part of where her inspiration comes from.

Keith Kugo is a multidisciplinary artist who specialises in music production, architecture, and painting. Keith is constantly progressing his sound and refusing to be bound to one box. Deeply embracing his Zimbabwean cultural roots and his transition to living in NZ and Australia, Keith infuses the vivid experiences that were a poignant part of his childhood into his creative process.

Phylo is a proud Ngarrindjeri and Narungga man who has spent the last few years making his way into the music scene, from performing alongside Playback 808, Aquade, Oc3aneyes and Barnaba$ to touring high schools teaching the next generation.

From Aldinga, Taiaha, AKA ‘The Weapon’, is bringing political hip-hop into a new era. Armed with his Maori heritage, a guitar and strong community, 2021 saw the release of Taiaha’s debut solo album Rubbah Dubs, and support gigs for Archie Roach, Chris Finnen, Allda and Bone Thugs N Harmony.

The WOMADelaide x NSS Academy is a WOMADelaide Foundation project which received assistance from the Federal Government’s Restart Investment to Sustain and Expand (RISE) fund, with support from the City of Playford, Foodland and NSS.